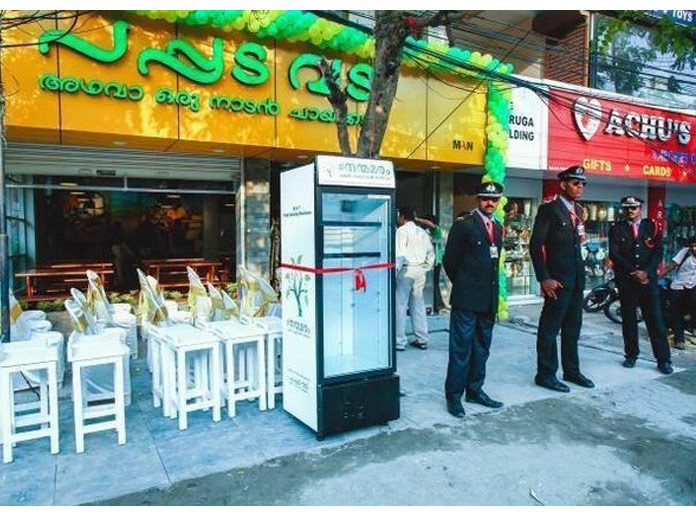 Here’s a hero story to brighten up your day! In Kochi, India, 28-year-old restaurant owner and mother of one, Minu Pauline has done one simple yet profound act of kindness.

Pauline has long noticed the traffic of homeless and hungry people walking by her restaurant on a daily basis, rummaging through her garbage in hopes of finding something to eat.

More often that not, Ms. Pauline also has leftovers from her restaurant at the end of the day which is likely to be disposed of anyway. So, she did what only a person with a genuine heart would do.

Pauline said she was compelled to act and was moved to battle both food waste and hunger after seeing people scavenge from her bins.

“If I kept doing nothing then nothing would have happened..”

Pauline told Huffington Post there was one woman in particular that made her decide to do this. She had been sleeping but got up because she was hungry.

The fridge was officially unlocked on March 30th and has been open 24/7 since. Anybody and everybody can get food from the fridge – no questions asked.

Local patrons and supporters from other towns have also been consistent in donating to this cause.

During her interview with Huffington Post, Pauline has also confirmed that she, herself, puts 75-80 portions of leftover food in the fridge as her share.

“Money is yours but resources belong to society,” Ms. Pauline said.

Seeing the idea of this big-hearted business woman has labeled this act that is creating too much attraction from the homeless to her restaurant as crazy and risky.

Ms. Pauline responded like a true business woman would.

“But it’s for the good of the community. Nothing has happened before because no one wanted to take a risk.

“Nothing has happened yet, but I’ll take it out if I need to.”

“You should stand up for the change you wish to see.”

In my personal opinion, her restaurant will be well protected by the homeless because they will see her as a friend – a good person that deserves nothing but goodness in her life. She didn’t have to do this but chose to do so to make a difference. Humanity isn’t that hopeless yet to bite the hand that feeds.

Kudos to you, Ms. Pauline! Your one act of kindness is another good deed that can set off a chain of action through other people.

We wish for your restaurant’s safety and success!