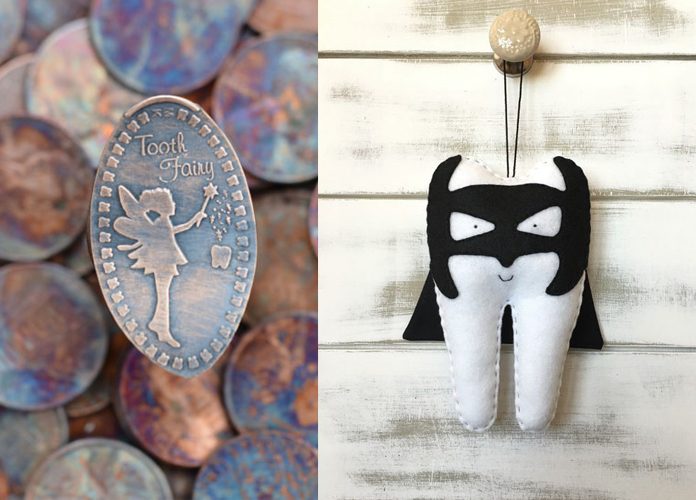 The tooth fairy idea has been a fantasy many kids grew up believing especially in the western side of the world. I remember my aunt who lives in the US telling me about the tooth fairy whenever she would come home to visit. And, I’ve always wondered if these fairies are true. My father was not a believer and neither was my mom. Much like every other human being, I’ve lost several teeth but once did get paid in cash. But, it does not mean we can’t create great memories out of a fantasy.

Sooner or later kids will understand the concept of each family having their own fairy. Until then, we got some cool ideas for conducting your fairy business with style.

Parents know the tooth fairy is just a myth – a fantasy to calm kids down when their teeth are about to fall out. But, there’s actually a history about how the fantasy started. In Europe, it’s a tradition for parents to bury their children’s baby teeth. Then, when the sixth tooth falls out, they take the tooth from under the pillow and slip money or a gift in exchange for the tooth.

In the middle ages, people believed different things. The English believed burning baby teeth will spare the child hardship in the afterlife. The Vikings paid children for their teeth while Scandinavian warriors believed they bring good luck and wore them around their neck when they go to battle.

The dark side of the history? Some cultures believed that if a witch gets ahold of someone’s teeth, she can take control of that person. It was much later when the brighter sides of the tooth fairy ideas surfaced and stuck to be what most kids believe in now.

How cool would it be if your child wakes up in the morning and find a dollar behind that door? It would be awesome, I tell you. You can also get one on amazon.

Definitely, this idea would be perfect for multiple child parents. Twins, triplets or even if you have four kids whose ages are close to each other, assign one pocket for each child.

4Tooth Fairy in a Box

A cute stuffed toy? Why not?

The tooth fairy ate my tooth and turned into a monster! I must have cavities!

Oh my gosh! This is super cute! Every princess wanna be would squeal in joy over this.

A note is fine but I wouldn’t mind seeing a dollar or two with that note!😜

I love this idea but let’s not forget to wash them after every use, okay? 😉

Clearly, this is a lot of effort. But, if you have spare time in your hands, this would be a great way to kill time.

Little boys would love this! I mean, most boys love Batman, right?

They should make a tooth fairy store where parents can buy fairy coins and kids can buy items they like with this currency! Now that would be cool.

If you leave milk and cookies for Santa, why not leave a comfy bed for the fairy to sleep in in case she’s tired? 😊

Or maybe a teepee so she has more privacy?

Every kid knows fairies live in the woodlands. A garden stop for the fairy is only appropriate!

Don’t forget to fold in a dollar in those cute envelopes!

Personalized? Yes, I dig that.

For the more shabby chic fairy. 😁

Since we’re already going all out, forget about the bed and the teepee and give her a cottage all to herself!

Absolutely adorable! Can’t get any cuter than this.

For every parent/fairy needs, get one now!

24Reward them with Coin

Gold? Yeah, I can handle some gold.

I hope I see a dollar in there tomorrow morning! 😁

If you don’t have that much time to plan these ideas out, there are several things you can do.

So, mommies and daddies, have you got any favorites among the brilliant ideas we gave you?

Ultimately, kids would already enjoy the whole fantasy. But, make one of these and create and even more special memory of their childhood.

You can also be creative in what you’re going to exchange for their teeth. Ideas such as a coupon for a day at the zoo, or a note to get their favorite ice cream or a promise of a new toy will also work.

All in all, add a lot of love in what you give and your kids will feel the magic exists! Any thoughts on this post? Leave us a comment below!